There are few things better than a well-made piece of specialty cheese, especially one that is perfectly aged. So you head to the cheese section, you pick out some pieces; take them home with big plans on how you are going to enjoy this cheese. Then just when you are about to open the package you spot something through the packaging. What is that? Is it mold? Is it debris? Maybe moisture?

Cheese professionals everywhere can likely relate to an instance like this where someone calls or returns to the store with a piece of cheese that “has something wrong with it” or is “moldy”. Only to discover that the cheese is in fact not moldy, and what’s more, what they’re seeing is desirable and sought after.

All week we’ve been at UW Madison’s Center for Dairy Research learning about cheesemaking and the world of cheese. During our time here we have really learned that the true beauty of cheese is realized when art and science come together; and sometimes this beauty can be confusing! So, if what you are seeing on your cheese is not mold, and not a defect, then what is it?

What you are seeing is crystals. That’s right, crystals. Some appear white and shaggy around the edges while others are bright white and appear as little round specks in the cheese. Many people will ask for them by describing “those crunchy little things”, or “the little white bits” and even the “salt crystals”. The thing that is so commonly thought of as a flaw is actually quite the flavorful feature!

These white crystals or series of crystals almost looking like a smear across the face of the cheese are made up of either Calcium Lactate or Tyrosine. A sign of a well-aged cheese, calcium lactate crystals are more likely to occur on the surface of cheese, like extra aged cheddar. These crystals form from the reaction of lactic acid (produced during the cheese making process) and Calcium ions (released from the proteins of milk) also during the cheese making process. This reaction on the surface of the cheese gives a white to off-white crystal that has a tremendous crunch when bitten into, and gives the cheese another flavor dimension.

If you are able to find a piece of cheese containing these white crystals, relish the experience! The crystals are a sign of a well-aged cheese and they are often a nice compliment to the flavor and texture of the cheese paste. For more information on the complexity of these crystals and how they are formed click here. 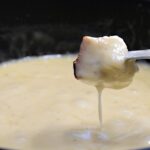 A Table for Two: A Fondue Date Night 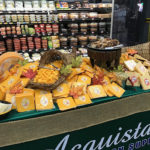 Playing with your Food 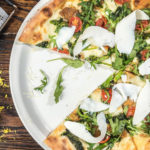